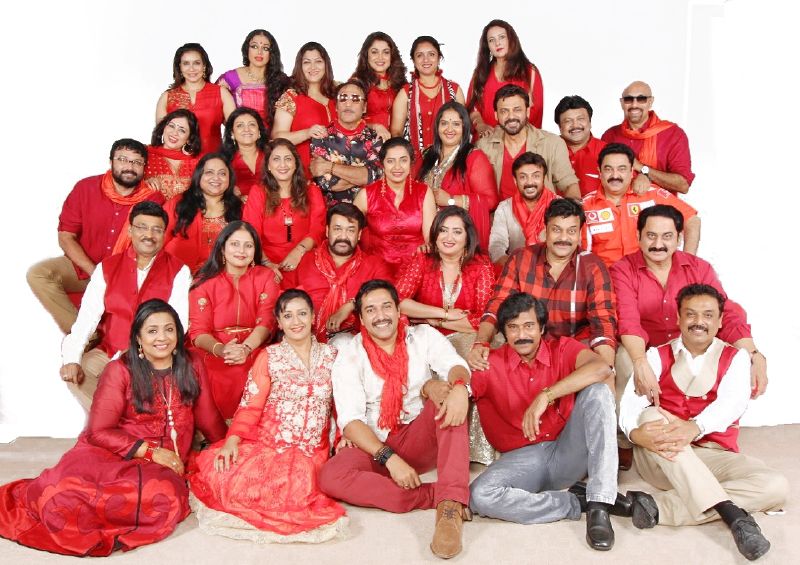 The 6th edition of the 80s actors re union was celebrated in Nina Reddys guest house in olive beach, Chennai on 29th august.

The theme was Moulin Rouge

The house was decorated in true French styles in red gold and neon, red carpets red velvet cakes red macaroons and red roses and red friendship bands welcomed the 34 guests who were dressed according to the theme …..Red and Beige were the color of attire …All women were dressed in designer were in RED

…The house resembled the red hues of Moulin rouge Paris with red candles and reddish mood lighting ….in the sun deck and red lantern lit the pool with gobos circulating theme of 80s actors logo and Moulin rouge logo …..

The new guests for this year were stars from Bollywood 80s too like Jackie shroff, Poonam Dhillon and Swapna who worked in South Indian films

Rehman and Parvathy from Kerala and

Satyaraj and Bhagyaraj from Chennai

The evening started with a welcome and a photo opp in the façade of a mouline rouge embossed red velvet and gold neon back drop specially created. They passed thru the stairs decorated with red and red dotted pom poms hand made by the female actors …and candles lit in red glasses on the side of a winding staircase that lead them to a sprawling deck with gabbanas and gazebos decorated with red stenciled and chinese and French red lanterns

The gusets were shown a 10 minute audio visual of the intro to 80s actors club and the past celebration , inviting 2015s new entrants and leading them to the Moulin rouge party …Gifts were distributed to all and specially to the gorgeously dressed women and the very important portrait pictures were clicked by stills Ravi …who is a favorite of all stars from 80s

The party started with karaoke singing of Sumaltha , Jackie and Jayasudhas renditions of 80s western pop hits and moved onto Hindi songs and Tamil and Malayalam songs by Mohanlal and Suhasini

The dance floor was kicked off with a mesmerizing dance by Poornima, Suhasini and Menaka from Shaukeen called Manali Trance

Highlight was the Lungi dance where Kushbu distributed Lungis to all .. And every star danced wearing lungis … Jackie Shroff took all the 12 lungis back to Bombay as a memorabilia

Mohanlal does a magic show every year and this year was his magic trick of levitation …. every year he attempts …so far no success This year too tried with Kushbu as the volunteer but failed But he refused to leave until he succeeded …Sarath kumar was the candidate and the levitation actually happened everyone cheered him Mohanlal succeeded in his magic trick this year.

The arrangements took 10 days of Suhasini, Kushbu and Lissy’s time and efforts to bring the classy themed re union