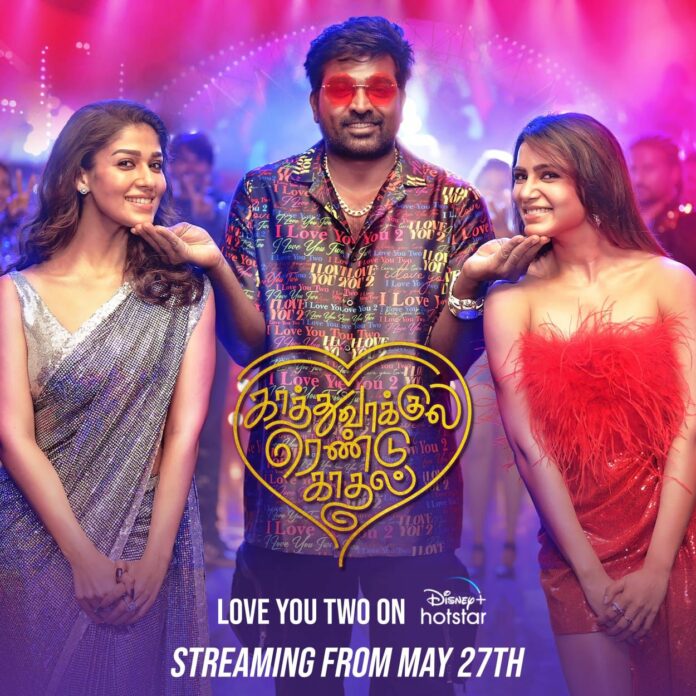 Chennai (May 19, 2022) – Disney+ Hotstar has today announced that it will be premiering the year’s biggest Rom-Com entertainer “Kaathuvaakula Rendu Kadhal” starring Vijay Sethupathi, Nayanthara, and Samantha, from May 27, 2022, onwards.

Disney+ Hotstar has carved a niche of excellence by presenting the best Originals and movies to Tamil audiences, delivering content that is both critically acclaimed and entertaining. Now, the reputed OTT platform is delighted to present the year’s biggest Rom-Com entertainer ‘Kaathuvaakula Rendu Kadhal’.

Kaathuvaakula Rendu Kadhal generated an impeccable buzz during the pre-release phase itself and proved to be a great winner at the box office as well. Filmmaker Vignesh Shivan’s conceptualization and presentation along with the stellar performances of lead actors Vijay Sethupathi, Nayanthara & Samantha won the hearts of audiences in the theaters. The film is lauded for being a complete entertainer which is packaged with abundance of fun, romance and songs that have become chartbusters.

Disney+ Hotstar is now elated to present the film to audiences all over the world. Incidentally, Disney+ Hotstar has already announced a big-ticket entertainer ‘O2’ starring Nayanthara, which will also be premiering soon.