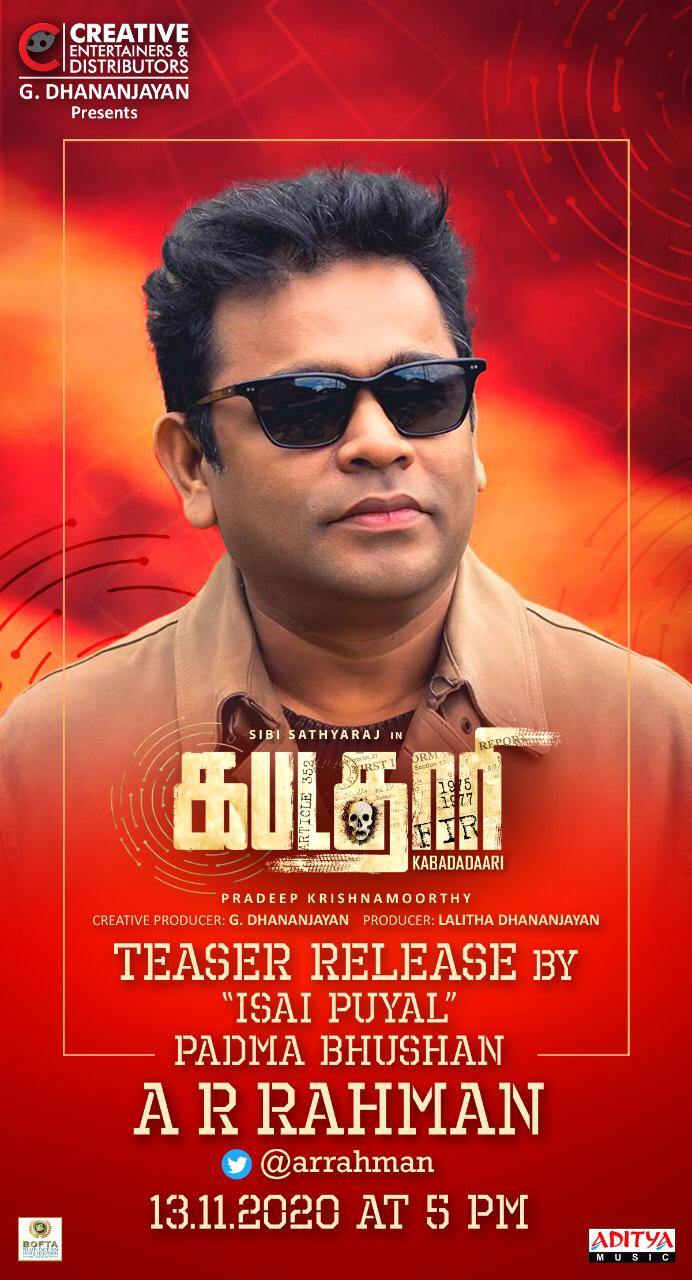 Sibiraj starrer ‘Kabadadaari: has been finding the best reach of decorous receptions from the time it went on floors. Additionally, the promotional phase turns to be an elevating phase for the film as lots of prominent celebrities are coming forward to unveil the film’s promos. Initially, it was actor Suriya, who launched the film’s first look, and now, it’s none other than our ‘Madras Mozart’ – Oscar Award-winning musician, Padma Bhushan AR Rahman will be launching the teaser on November 13, 2020, at 5 p.m. on his Twitter page.

Producer G Dhananjayan of Creative Entertainers and Distributors has been continuously delivering lots of good contents. Last year, he delivered an exceptionally excellent movie titled ‘Kolaigaran’ starring Vijay Antony and Action King Arjun in lead roles, which was a huge success. This has raised the bars of expectations for his forthcoming venture – ‘Kabadadaari’. With Oscar Nayagan AR Rahman releasing the film’s teaser, it is going to add more excitement to the anticipations. The combination of Producer G Dhananjayan, who always looks up for unique contents and AR Rahman, who is famous for freshness in music will add the appropriate vividness to the film.

‘Kabadadaari’ is produced by Lalitha Dhananjayan for Creative Entertainers and Distributors. G Dhananjayan and John Mahendran have penned the screenplay-dialogues, which is directed by Pradeep Krishnamoorthy. Sibiraj, Nandita Swetha, Nasser, JP will be seen playing important characters. Simon K King is scoring music, Rasamathi is cranking the camera, Videsh took care of Art and Praveen KL is the Editor.
‘Kabadadaari’ is scheduled for December release.