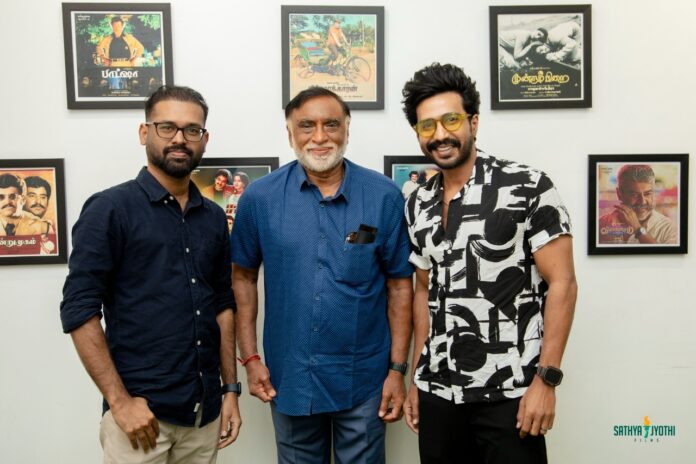 Sathya Jyothi Films, ennobled as one of the most prestigious and well-esteemed production houses of the Indian film industry,Owns an incredible record of churning out blockbusters and award winning films . Mr. T.G . Thyagarajan produced films have garnered more than twenty state awards and four national awards. The production house is currently involved in the creation of promising movies that include Hiphop Tamizha’s ‘Veeran’, directed by ‘Maragadha Nanayam’ fame ARK Saravanan, which has completed its production works, and one of South India’s biggest projects titled ‘Captain Miller’, which is progressing briskly with its shooting. The movie has big names like National award-winning actor Dhanush, Kannada Superstar Dr. Shiva Rajkumar, Telugu industry’s reigning actor Sundeep Kishan, gorgeous and graceful actress Priyanka Arul Mohan and many others.

While the much-awaited lineups have already created huge expectations among the fans and trade circles, Sathya Jyothi Films proudly announces its next production venture that will bring together, the most fascinating and successful combo of actor Vishnu Vishal and filmmaker Ram Kumar. The duo has delivered a couple of critically-acclaimed and commercially successful movies titled ‘Mundasupatti’ and ‘Ratchasan’. While the former became a blueprint for many filmmakers, producers, actors, and technicians that new-fangled ideas with the right presentation will taste success, ‘Ratchasan’ turned out to be the country’s sensational hit with several remake versions proving to be a grand success.

Actor Vishnu Vishal has consistently proved his success with back-to-back commercial hits including FIR and Gatta Kusthi. He is now acclaimed as the most bankable star by the producers, distributors, and trade circles for his choice of movies.

Significantly, filmmaker Ram Kumar acclaimed as a ‘Master of all genres’, has struck successful chords with unique content. While his maiden directorial ‘Mundasupatti’ was a comedy caper, he surprised everyone with his second outing ‘Ratchasan’, which was a spine-shuddery psychological thriller. Sathya Jyothi Films is delighted to collaborate with this path-breaking combination for a film, which will be completely different from their erstwhile movies.

This yet-to-be-titled movie will be a beautiful and intense story based on fantasy love drama with comedy elements made on a large canvas. With both the films of this successful combo becoming blockbuster hits, this movie is sure to complete its hat-trick spell. The film is presented by Sathya Jyothi Films T.G. Thyagarajan and is produced by Sendhil Thyagarajan and Arjun Thyagarajan.

The official announcement regarding the film’s shooting plans, cast, and technical crew details will be revealed soon.