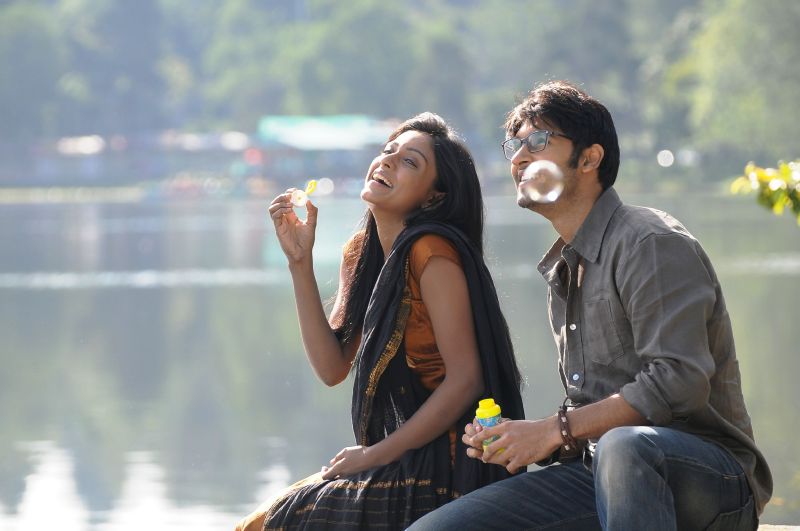 UYIRRMOZHI
– a film by Rajaa

Manuv Production Uyirrmozhi (Tamil) unfolds a grand anthropological canvas. It depicts the journey of the five DNA based chief male characters from second Ice Age through Stone Age and classical Age, into modern Age. All three primitive eras focus on how the Alpha male of each age kills, tames or defeats introducers to his tribe as peaceful life. Be it a smiled on or a dragon or a bull. The transition to contemporary age lucidly flows as the tamed bull.The film succinctly suggests how the environmental surplus can be diminutive to make the all powerful alpha male into a Casual guy, demonstrating his diluted dare-devil demeanor in the company of damsels. May be it is so, since the man has not met his better half yet, as the homoeracter myth would go. Sakthi, the alpha male own is sketched so.

On the aesthetic side of the world there loves Priya, a young and exquisitely beautiful music teacher, who would make the hearts of men of every age to skip a beat. After presenting her morning is a brilliant stop motion sequence, the action comes to a limbo frame.

Now the first phase of conflict enters. So save a mongrel crossing the road, Sakthi brings his like to a grinding halt. The scared puppy barks at him and Sakthi speaks the opening line of the movie. “I hate dogs” But what follows this whimsical utterance of playful hatred is ironic.

Sakthi sees Priya standing at the bust stop. He is hit by a thunderbolt. It is love at first sight.. As the old saying “All is fair in love and war” still has relevance, Sakthi decides to win Priya’s heart at any cost

In the meanwhile, the other men in the world are not itle. They also fight to tie the nuptial knots around Priya’s neck and possess her exclusively for themselves. There is a kaleidoscopic vision of the contestants. Like the alpha male Sakthi, there is also Jacks on, the Beta male. He always loves a peaceful, compact and secured family life. So he lives as a dance master, with his young loving wife Jessie and their children Ryan (9)  Life takes unpredictable twists and twins that Jack also Ballsive love with Priya later.

Love lures not only men of action and those of compromise. Clowns are also in the tray. There we have this Gamma male, Ganesan. An aspiring marketing executive who cannot even deliver Pizza punctually. His dilly-dallying in daily life deprives him even of the chance to expenses his love to Priya. In fact he is the rib tickling goofier of the movie.


As an odd man out in line of champion fighters, is Raithu. He is the senior most of all in his pursuit of love for Priya and junior most of all in the count of his age. He is a plus two student in the school where Priya is working as a Violin teacher. raithu sees Priya in everything. The only space where his naraissm does not enter is there where Priya is. raithu is so engrossed in his conviction, that he really declares his love to Priya and gots a positive response, but not so positive in the strain which Raithu expected it to be. But raithu is a relentless gladiator in the area of romantic love. This time he succeeds in his love… of course with another girl of his own age.

Finally comes the towering personality of Dr.Madhana Gopal, an internationally reputed eye-surgeon. The only scripture he practices is the command “Let there be Light”. He considers his profession as the light of the world. His only mission as he declares in the doctors’ conference is to bring light into the dark world of the visually challenged.

As all these five men are incurably written by the love long, it is Sakthi who walks straight into the eye journey of Priya. Where he goes straight to the table where she sipping at her evening coffee in the coffee shop, he does not know he is walking towards a shock treatment. Before he could complete his self-introduction, Priya gets a call from her friend looking for a specific group of blood. Sakthi is shocked out of breath where he realizes by the way Priya handles her phone and voice
software Jazz meant for visually challenged people. When it is confirmed that Priya is visually challenged, all Sakthi’s premeditated romantic rendevoury takes a different form. Images from Sakthi’s boyhood revisit to haunt him. A series of sequences bring Sakthi and Priya together.. Sakthi’s extremist concern for Priya.

Priya’s closeness with Sakthi for his logically justified by the fact that Priya likes him as he treats her as his equal without any tinge of repulsive pity. Sakthi never tells Priya about the little angel he lost. But the nasty everyday reality raps at their door. Once by a stranger, in fact a toddler, Priya is crudely reminded of her blindness Sakthi consoles her without sounding patronizing and takes her on a breath taking ride across nature and elements. He takes here to Dr.Madhana Gopal for eye check-up. Jack’s family also goes to Dr.Madhana Gopal for a routine eye check-up and there they donate their eye too. While returning, Sakthi’s ex-girl friend comes there and behaves in an audaciously intimate way by smacking a kiss on Sakthi’s cheek. Priya is hurt. What begins as a quarrel and Sakthi’s frustration chat he is reluctant to propose fearing the loss relationship change the dimension and colour of a petty quarrel. She hide and seek of communication takes a monstrous shape when Sakthi blurts out because of a momentary lapse of balance
“Am I your walking stick?”. This, quite justifiably hurts Priya in extreme way. She walks out on his life. On her way back home she meets with an accident. The vehicle, which hit Priya, was driven by Jessie (Jackson’s wife). Jessie died in that accident. Priya escapes with minor injuries. Two months after the accident, Priya gets her eyes transplanted, when she opens her eyes and sees this world around Sakthi is missing. Priya realizes that her angry outburst that she would commit suicide if ever Sakthi crossed her life again, has scared Sakthi away.

As she is discharged, she prescribes Dr.Madhan in an undesirable way, that he reveals the identity of the eye donor ; the eyes belong to Jackson’s wife Jessie who died in the accident. Priya goes to thank Jack. A relationship blossoms as there is the another child Ryan who becomes very much attached to Priya. This encourages Jackson to propose marriage to her. Priya refuses and leaves.

Her search for sakthi begins. Only then Priya realize that she had not introduced Sakthi to any of her close associates. School or even her. As Priya has never seen Sakthi, she goes to the places where they would meet. But to no avail that leaves Dr.Madhan as her only chance to know how Sakthi would look like. Priya fears that something bad may have happened to Sakthi. So she requests Madhan to describe
Madhan readily agrees to help her. revealed to the viewers that Dr.Madhan has given the wrong description, deliberately.

Why did Madhan do so? What happened to Sakthi? Will Priya meet Sakthi again? Will they be reunited? That is the climax of the film.