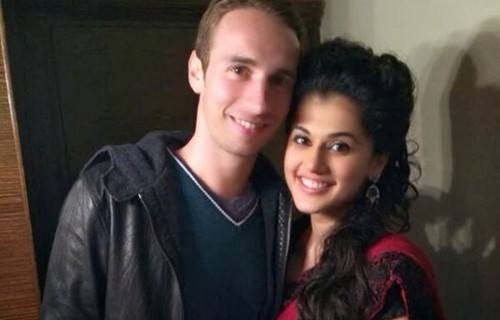 Actress Taapsee Pannu recently got in to gossips with the relationship she had on Mathias Boe, Badminton Player. The buzz is that the hot girl seems to have found a love and dating with Denmark badminton player. The couple reportedly met for the first time in Hyderabad during a badminton match. They turned friends soon and started liking each other.

Currently, the player down to Punjab to meet actress also took breaks from the shoots of forthcoming Hindi movie Running Shaadi.com and spent time with him. However, she has denied the news and claimed that there was not truth in it. Taapsee Pannu was earlier linked up with a few of her co-stars. Firstly, it was Manchu Manoj and later it was Mahat Raghavendra. She had denied the news on both the occasions and had claimed that they were her good friends. Meanwhile, Taapsee Pannu, who was last seen in Ajith Kumar’s Arambam, has multiple projects are in queue Muni 3: Ganga, Running Shaadi.com and Vai Raja Vai.