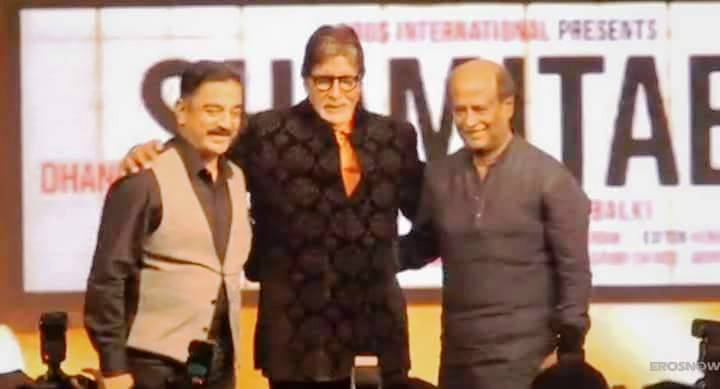 Wowing with blissful creations of iconic masterpieces, here comes the most unparalleled iconic generation of super league actors – Amitabh Bachchan and Dhanush to set the celebrative mania of ‘Shamitabh’ high on exhilarations in Chennai.

SHAMITABH – An amalgamation of colossal geniuses of different ages and panoramas come together, especially Amitabh Bachchan and Dhanush who have their names coalesced together in the film’s title. The theatrical trailer hasn’t just left everyone awestruck, but has stormed the towns elegantly with its exquisite sketch of characterisations of what we see Big B and Dhanush breathing through their souls. The prodigious Isaignani Ilayaraja striking his musical chords has emblazoned the film with more adornments. His saliently stupendous works with director Balki in Cheeni Kum and Paa had turned the global spotlights on these projects and Shamitabh gets bigger and greater. The queue of monstrous personalities doesn’t end here as the embellished visuals by one of the country’s most ravishing cinematographers – P.C. Sriram cranking the shots.

And finally, hailing from one of the India film fraternity’s most celebrated family, Kamal Haasan’s youngest daughter Akshara Haasan makes her debut with this film. Brimming with plethora of distinguished personalities, Shamitabh has cast is magical wand across the continents that awaits its release.

Much prior to this grand big release happens on February 6, the entire team of Shamitabh will be meeting the media channels and more Chennaites at Sathyabama University on January 23.