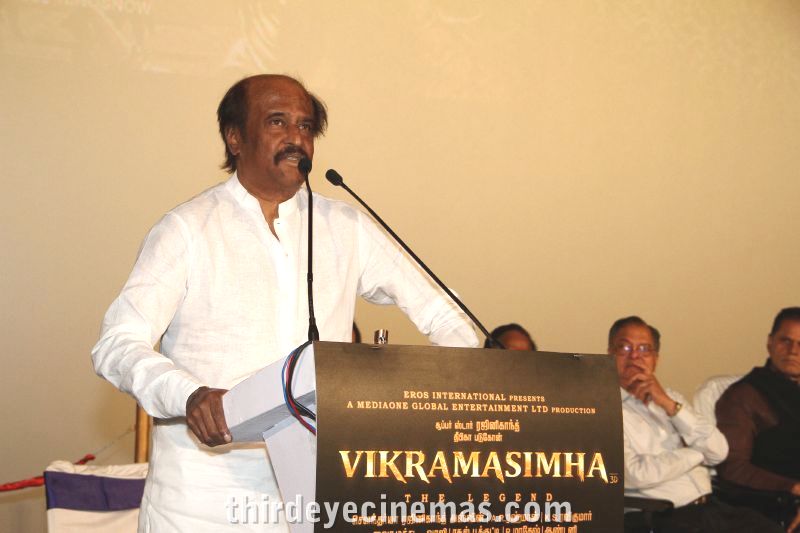 “I always watch a movie like how the audiences do. Watching the movie, I was upset for about first 10 minutes. Because it is very different from general movies and it didn’t look real to me. But I’ve forget that it is an animation after going into the story.” -Superstar Rajinikanth talks about Kochadaiiyaan.

“KamalHassan is the biggest actor and he shows so much interest in technology because he entered
the industry to become a director. He has to do a film like this but I’ve done it. It is all God’s magic”

To my guru who is on stage Dasari Narayana Sir, Rama Naidu sir, Ramesh Prasad sir, my friend Mohan Babu, my other friends Subarami Reddy, Murali, Rajamouli & Eros Producer & all other great people who have come here have said you all how difficult it is to make this picture. Actually I didn’t know it will take so much time to do this film because I’m just an actor, technically I didn’t show interest.

After my health upset, we started Rana a folklore picture like Rajamouli’s Bahubali but not to that extent! (Laughs). So after Robo, a science fiction is done, Sivaji, political film, Chandramukhi a ghost film & Baba god film. God film didn’t do well but ghost film ran well (huge laughter). So I’m just an actor, not a writer also. You all know the open secret, Kamal Haasan is the biggest actor. But I’m getting technical characters like Robo & Vikramasimha which is God’s play. Kamal Haasan is more interested in technology. More than actor, he came to cinema to be a director. Such a technology minded person is not doing these films but you see I’m doing it. So as human beings we think something but god has some other plans for us. Whenever we think something 100% it won’t happen ie philosophy. When somethings happen we get happiness, when everything happens we won’t have anything to be happy.

Two years they said me about this Kochadaiiyaan film, prequel to Rana. Murali said doctors decided that you shouldn’t act for 2 years & how is it possible to do the film. Then I was wondering what to do whether to drop Rana or what. Murali said, during Sultan The Warrior this motion capture technique wasn’t there. Then everyone & including the producers were confident but straight film is ok but when they said my daughter will direct where I can’t say no & at the same time I was wondering how will my daughter carry such a huge responsibility. Then I asked is it possible, it’s a matter of so many years & so many crores of rupees. Then they said me no sir we have planned it properly. So with belief in god I said yes. So after film’s release, you all will know how mentally my daughter was stressed & my wife Latha encouraged a lot. After the film’s success I wanted to honour my wife but Mohan Babu my friend, brother did it now itself, thank you very much it was very moving.

Actually telling we worked very hard it’s like preparing so many dishes at a time but it’s no use when the taste is not good. If it’s good only there’s some value for the handwork. The movie is censored & I saw the film. Not only my film, whenever I see a film, I watch it as an audience. I didn’t watch the 3D version, I saw the 2D version. When I saw the film, I was disappointed for 10 Mnts !! Now if you take N T Rama Rao who is not there, if you imagine him here it’s great but when I’m alive, there’s a lot of difference in watching it in straight & watching in animation there will be disappointment. After 15 minutes, going inside the story, you will forget the animation. That’s why I’m telling beginning 10 mins, you will feel it the same I felt later you enjoy.

A R Rahman is doing a same animation film for Walt Disney which will take 6-7 years to complete. So he said if we do it musically it will be nice with music & dance then the character Kochadaiiyaan is a warrior, dancer & a philosopher. Combing these 3 there 6-7 songs, my wife Latha also sang a song after a long time including me so it’s musically emotional a philosophical drama where the subject is very strong. With God’s blessings & your encouragement hope the film is a huge hit. Dr Murali hats off to him who has worked so much for the film. He could have earned crores of rupees easily but he came forward to do it. He has so many friends in Hollywood, where I too did a English film Blood Stone with him. Already Rajamouli explained you all how tough it is to make the film. After the film’s success, we’ll have a grand function. Every time Telugu audience, be it my acting or style have always encouraged me. So this is a different film so I hope your encouragement will be there for this film too.