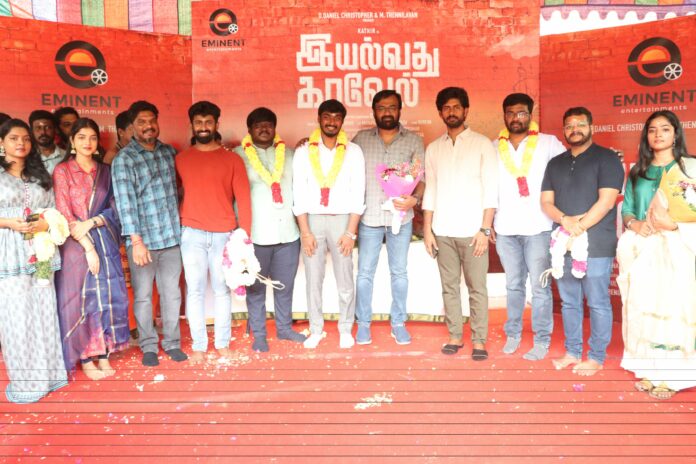 Kathir, who acted as a college student in the critically acclaimed film ‘Pariyerum Perumal’, is all set to star again in a new film set entirely on a college backdrop. The film is titled ‘Iyalvatu Karavel’ and is based on love and student politics at the oldest college in Chennai.

Debut Director S.L.S. Henry has Written and directed the film that’s being produced by Daniel Christopher and Tennilavan on behalf of Eminent Entertainments production company.

Yuvalakshmi, who was introduced to all of us as a child artist, is making her debut as a heroine in this film.
Also starring in the film are ‘Master’ Mahendran, Karu. Palaniappan, Aadukalam Narain, ‘Smile Settai’ Anbudasan, Lagubaran in prominent roles.

The production company said that the film’s director had studied cinema with Director Ravikumar of Indru Netru Naalai fame and Annanukku Jey Director Rajkumar and that he had done a great deal of research for the film and that college students would talk about various things about politics.

Filming is set to begin this month as preliminary work on the film is nearing completion. The shoot is set to take place in Tindivanam, Pondicherry and North Chennai.