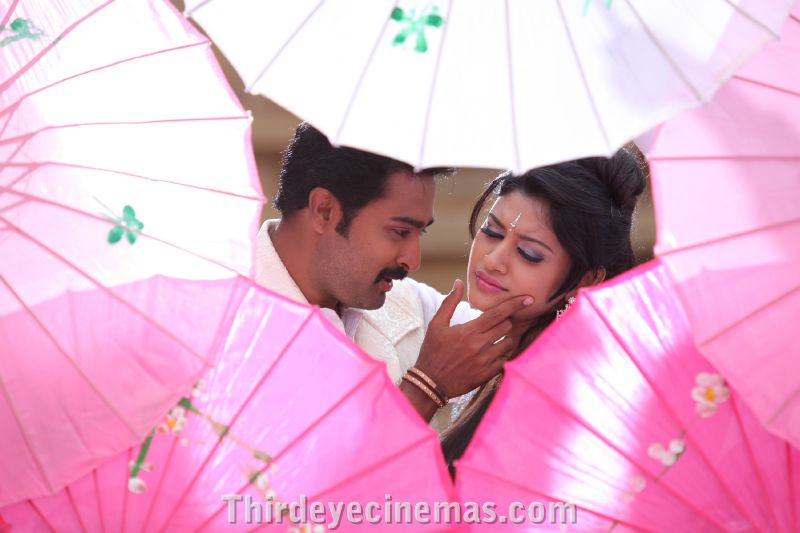 The film puts the scanner on the strangeness of reality in a busy city (Chennai) in Tamilnadu, teeming with life. It deals with issues that are real, contemporary, and quite complex.
The film revolves around the lives of two people in extremes. On one end is Karthik (Prasanna), who is excavating riches by being in the booming IT concern in Chennai. He wants to be successful at any price. He moves around in plush chauffer driven cars, uses state-of-the-art phones, and flirts with the telemarketing girls. He has a full-fledged affair with his subordinate Monika (Ovia), even though he is preparing to be engaged to his family friend’s daughter Pavithra (Iniya).
On the other end there is Kasi (Vimal), who lives in a slum and works in a supermarket doing odd jobs and being an errand boy for his supervisor. His lifestyle is frugal and unchanging. Kasi has a soft corner for his co-worker Selvi (Ananya), and she reciprocates his feelings.
The film reaches a turning point the moment Monika learns that Karthik is getting engaged to Pavithra. A fight occurs between the two and in the heat of the moment Karthik forgets to take his cell phone which slips out of his hand. The phone accidentally reaches the hands of Kasi and he keeps that as his treasure out of lust. Karthik gets worried over his lost phone. The phone contains some private information of Karthik, and that should not be leaked in public. Karthik tries to reach the finder by making continues calls to the lost phone, but it remains off. Karthik gets terribly frustrated.
Once, Kasi attends a call from Karthik, but not convinced to give back the phone. Kasi is not able to decide whether he should handover the phone to Karthik and remain under tremendous pressure. Selvi notices the sudden changes in Kasi and tries to find out the reasons. After a long persuasion, Kasi reveals everything. Realizing the seriousness of the matter, Selvi suggests Kasi to return back the phone to the rightful owner.
In the meanwhile, without knowledge of Kasi, the contents of the phone were leaked in the internet and goes viral. This makes Karthik violent against Kasi.
It’s a long winding chase that Karthik embarks on, since Kasi soon gets intoxicated by the dope of contentment that he derives from being in charge. The climatic confrontation between the two is all the more vicious and bloody, as they literally try to tear each other apart, before finally they realized about real culprit. Karthik gifts a high end phone to Kasi as a goodwill gesture of friendship.
The End

Actor Vivanth Actor Vivanth has been finding decorous reception for his performance in the recent Tamil release ‘Parris Jeyaraj’. Well, he isn’t someone new to...
Read more
News

National Award winners together in “Marechan”

Here is yet another ample exemplification of Arun Vijay’s energetic enthusiasm as the actor proceeds briskly with one of the most important films in...
Read more

Actor Vivanth Actor Vivanth has been finding decorous reception for his performance in the recent Tamil release ‘Parris Jeyaraj’. Well, he isn’t someone new to...
Read more
News

National Award winners together in “Marechan”

Here is yet another ample exemplification of Arun Vijay’s energetic enthusiasm as the actor proceeds briskly with one of the most important films in...
Read more
News