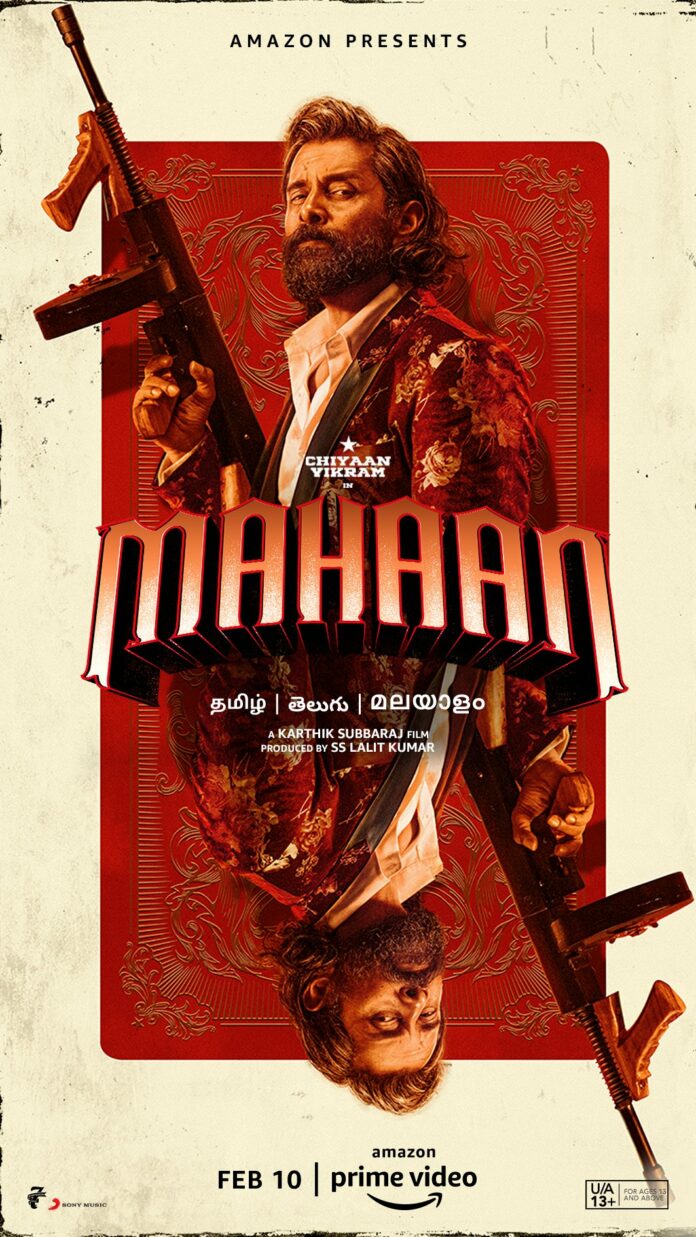 Mahaan is directed by Karthik Subbaraj and produced by Lalit Kumar under the banner of Seven Screen Studio, and stars Chiyaan Vikram in the titular role along with Dhruv Vikram, Bobby Simha and Simran in pivotal roles

MUMBAI, India—3 February, 2022—Prime Video, today unveiled the trailer of Tamil action-thriller Mahaan, which premieres on 10 February. Directed by Karthik Subbaraj and produced by Lalit Kumar under the banner of Seven Screen Studio,this action-packed drama boasts of an incredibly stellar cast, with Vikram in the lead along take Dhruv Vikram, Bobby Simha and Simran in pivotal roles. Mahaan will be available to the viewers in Tamil, Malayalam, Kannada and Telugu. In Kannada, the film is titled Maha Purusha.

The fast-paced trailer takes us through the story of a simple man who goes through a personal crisis when his family walks out on him when one day he steps out of line from his straight-laced and principled life. He moves on without them to realize his ambitions, but even as he reaches the pinnacle of success, he misses the presence of his son and wants him back in his life. What follows is an action packed narrative with unexpected events unfolding in his lifethat take him through highs and lows, changing the course of his existence.

“Mahaan is a labour of love for me with a strong cast and crew supporting me by giving their very best”, said Karthik Subbaraj, Director of the film.“It is always a delight to work with Vikram, and Mahaan has been extra-special, as it is the 60th movie in his expansive and impressive career. The movie has also given me the opportunity to bring together and direct the dynamic father-son duo of Vikram and Dhruv in their first on screen appearance together ever. I am confident that fans and audiences are going to love seeing them light up the screens with their own unique brands of creativity moving in perfect harmony with the other. I am looking forward to Mahaan premiering on Amazon Prime Video and reaching a much wider audience across the globe.”

Acclaimed actor Chiyaan Vikram who plays the titular role said, “Mahaan will have the audiences hooked throughout with its perfect blend of action and drama, balanced by intense emotions. My character in the movie has multiple shades and it was very interesting to transition from one emotion to another as the story progressed.It is, of course, also an extra special film for me – one,as I reach a milestone in my cinematic journey with this being my 60th film, and secondly as my son Dhruv Vikram is playing my reel-life son in it. He has worked very hard for this role,and I am very proud of him.Also working with a director as talented as Kartik Subbaraj, who has this exact vision for what he wants as an end result, is always a pleasure. I am delighted that Mahaanis launching on Prime Video and that it will reach viewers across the globe, starting 10 February.”

“Mahaan is very special to me as this is the first time I am getting to share screen space with my father and that too in a role portraying his son. He is a very talented man with an excellent understanding of the craft and I have so much to learn from him,” said Dhruv Vikram. “Working under Karthik SubbarajSir’s direction was a superb experience and he guided me through the film, helping me understand the nuances and intensity of my character in depth. It really brought out the best in me and I hope the audience enjoys my performance and the film.What makes it even more special is that Mahaan will be available for a worldwide audience to watch, thanks to the reach of Prime Video and I am eagerly looking forward to its premiere on the streaming service.”

“It has been a brilliant experience working with Vikram and Karthik once again – this time on Mahaan. The film is an action-packed entertainer with lots of emotions and drama intertwined throughout the story. Nachi, my character in the movie, is a humble and simple-hearted woman leading a simple life with her small and loving family, and how her world crashes when her husband strays from the path of an ideological life. I am sure Prime Video viewers worldwide are going to absolutely love the movie with its gripping storyline” shared Simran, lead actress of Mahaan.

“It is very exciting to see your work across borders and I am very glad that Mahaan will have a global premiere on Prime Video and reach a wider audience”, shared actor Bobby Simha. I am confident that Mahaan will enthral the audiences with the action sequences, the edgy plot and its ever-evolving narrative.”

Synopsis: Mahaan is a story about an ordinary man, who has a regular job and a small family with a wife and a son. He has lived a very ordinary life, never breaking a code or crossing a line, and his day’s chores are in sync with the sunrise and sunset. One fine day, when he steps out of line for the very first time in his adult life, all hell breaks loose and his family leaves him. In the turn of events, he joins hands with a long-lost friend from his childhood and becomes a billionaire living his life king size. However, misses his son every day. Life comes full circle for him, when one fine day his son comes back in his life in an extraordinary situation. What happens next is a thrilling, action-packed roller coaster ride.

Prime members will be able to watch Mahaan anywhere and anytime on the Prime Video app for smart TVs, mobile devices, Fire TV, Fire TV stick, Fire tablets, Apple TV, etc. In the Prime Video app, Prime members can download episodes on their mobile devices and tablets, and watch anywhere offline at no additional cost. Prime Video is available in India at no extra cost with Prime membership for just ₹1499 annually or ₹179 monthly, new customers can find out more at www.amazon.in/prime and subscribe to a free 30-day trial.