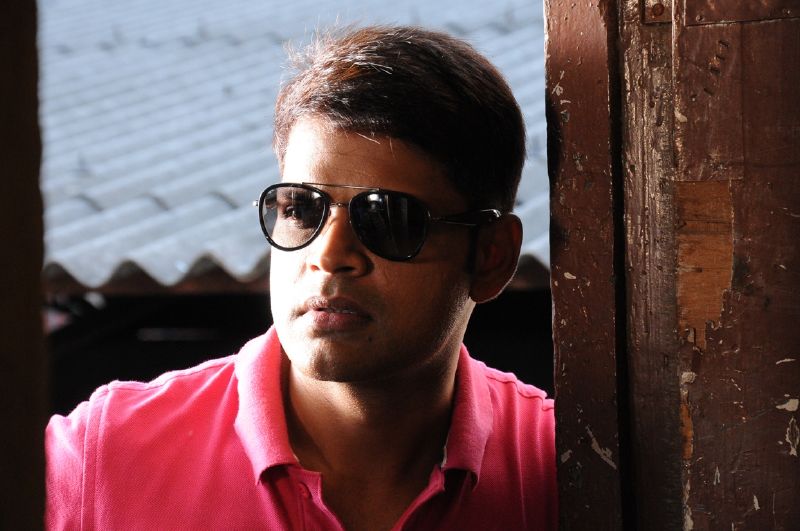 Its like we saw him yesterday in ‘12B’ movie as a mush budding young chap with full of adolescence.. And now he has finished off with his 25th movie..

Shaam’s 25th movie is ‘Porambokku’..He has seasoned, flown, grown and stands upright as an experienced artist by working in Tamil, Telugu and Kannada Film Industries in these 13yrs..Time has trained him with enormous skills and maturity..Lets now speak with Shaam..

Shaam:I am unable to believe that ‘Porambokku’ is my 25th movie.. Time is running with great pace.. 13yrs have passed on, how many experiences !!how many secrets !! How much ecstasy, everything is given by time..

I entered as a Youngster in ‘12B’ movie.. I have learnt a lot through Cinema..I have gained a lot from it..

Jeeva Sir’s acquaintance is said to be the most valuable phase in my Movie Life.. Similarly, S.P. Jananathan Sir’s ‘Iyarkai’ movie is an important Movie as Its a National Award Winning Film..

Same Jana Sir’s directorial is my 25th movie, it’s really a matter of great happiness and pride..Hither to, have worked with Directors like Jeeva, Vasanth, Jananathan, Priyadarshan, M. Raja amidst these 25 movies..How many experiences !!

And I became a Producer as well through ‘6’ movie.. After watching the movie, Media praised saying that “a naughty playful chap named ‘Shaam’ has had a great transformation into a dedicated actor” and as a Producer, I feel that I have earned it as a huge profit..I regret to accept  the fact  that Jeeva Sir is not here with me to see and feel my Success.. I actually Miss him a lot.. If he would have been here, he would have really felt very happy for me..

Q 2: How was your experience in ‘Porambokku’ ?

Shaam: After finishing my First Movie witJeevaSir , I was very happy to receive the Second movie offer from Jana Sir.. He is very well informed about the pulse of the movie audience.. He is a Multi – Talented Personality..Its really an unforgettable experience to have worked with him for the Second time..

Its not necessary that an artist must be formed by exhausting 10 person.. Jana Sir used to explain things in a beautiful manner, he is well experienced in the art of configuring a character.. It would be honestly interesting to listen him for hours together..

I have learnt so much from him that Sometimes I would doubt myself of holding a B.Com Degree !!

With respect to ‘Porambokku’, myself, Arya and Vijay Sethupathi have worked together..

Q 3: How about your Character?

Shaam: My character name is ‘Mechaley’.. Law is of sole importance to me and its administration means my doctrine..Law must not be revised for anyone at any cost and for any reason, my Character is portrayed like that..

Q 4:  What about the scope of each one of your characters?

Shaam: Each one of us hold exactly contrasting and unique identities..‘They are right in their own point of view.. Nobody is bad..’ This is the most admirable thing, we three have carried out three distinct personalities on each one of us and we have shared it all among ourselves.. It was a fabulous experience to have worked together for 60days..

Q 5: How about your experience of working with Arya and Vijay Sethupathi?

Shaam:Arya was introduced along with me in ‘UllamKetkume’ Movie, he is like my Brother and he used to call me as ‘Anna’.. He debuted with me and I feel very proud and pride by seeing himbeing Successful in his Career path.. He showers the same love and respect on me from the beginning and I’m happy to work with him..

Vijay Sethupathi has now grown up with his unique identity and personality..  I had personally admired his ‘Pizza’ and ‘SoodhuKavvum’ Movies.. I’m very delighted to work with him and we share a good bond of friendship.. He has been to my home many times, and he loves to haveBiriyani !!

We three used to stay in the same Caravan in our Shooting days and used  to have our lunch and dinner altogether.. We were so much attached, affectionate and adorable on each other with a good bond of understanding and hence we feel like losing each other after finishing with the shoot..

Q 6: Can you compare your experiences with ‘12B’ and ‘Porambokku’?

Shaam: Wow, 12B movie experience was really an awesome and unforgettalbe one.. I don’t know how to explain it !!  It was like a dream.. It was an ecstasy of my dream resting on my hands.. I was an imperfectionist at that time..But Now, Time has taught me a lumpsome..

I have earned ‘Purampokku’ experience after being matured and grown up.. Audience who used to recognise me as ‘12B Shaam’ will henceforth call me as ‘PurampokkuShaam’..

Q 7: ‘Porambokku’ is a word which generally means ‘degradation’ right?

Shaam: May be its talked like that, But it really doesn’t mean so.. Director has explained the title ‘Purampokku’ in the right manner and with the right reason in the movie.. Henceforth Audience view and opinion would change..Q 8: How about your experience of working in other Language Movies?

Shaam: Director Surender  Reddy introduced me in Tollywood with his movie ‘Kick’ and I earned a good name with it,hence got to be known as ‘Kick Shaam’ in the industry.. I constantly work in his movies and his ‘Race Gurram’ gave me an acceptable recognition..

I have finished with 5 Movies in Tollywood till date.. The recent release in Kannada named as ‘TananamTananam’ is my debut film in Sandalwood and it earned me with a positive name.. Its directed by KavithaLankesh and my co-stars were Ramya and Rakshita..

Q 9: What is your plain in ‘2015’?Shaam: I hope for a good beginning with the release of ‘Porambokku’ Movie.. Next is a Bilingual Tamil, Kannada Project with ‘Kuppi’ movie’s director A.M.R.Ramesh and I’m acting with Arjun Sir in it..

My next Tamil movie is a Madurai based story with debutant Director named Nagaraj.. Thus 4 Movies are lined up behind one another..

Q 10: How do you want to grow up as an ‘Actor’?Shaam: Cinema is a medium of Director and I always love to be a Director’s Actor.. I eternally entrust my Director and portray the character of their scripts..

Well, we wish a good luck for Shaam’s ‘Porambokku’ movie and a great success ahead with all his future Projects as well..

Keep an eye on us regularly for interesting and impressive updates !!!