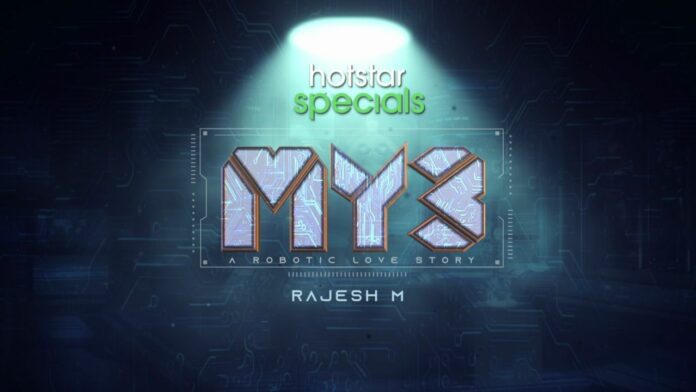 Disney+ Hotstar reveals the title of its new Robotic Rom-Com series ‘MY3’, inside the Bigg Boss Ultimate House

Chennai, India 2022: Disney+ Hotstar Tamil is elated to announce the title of its brand new Hotstar Specials – ‘MY3’. The series is a unique robotic love story.

Filmmaker Rajesh, one of the leading moviemakers in the Tamil industry has directed this series. The most talented and gorgeous actress Hansika Motwani, Mugen Rao, Shanthanu, and Ashna Zaveri are playing the lead roles in this series. Karthik Muthukumar is handling cinematography. Ganesan is composing the music and Ashish is taking care of editing. The series is produced by Trendloud.

‘MY3’, which promises to be a fun and heart-warming ride,had its title revealed by Hansika Motwani and Mugen Rao inside the Bigg BossUltimate house along with the contestants during the weekend.

Actress Hansika Motwani says, “It’s an honour to be a part of this series. It’s a sweet and delightful moment to be working with director M.Rajesh. I am excited to be collaborating with him after our movie ‘Oru Kal OruKannadi’. I am proud to be a part of something great created by Disney+ Hotstar that is consistently churning out great content for the Tamil audience. Being My first web-series, I am excited and eager to be working with powerhouse talents like Mugen and Shanthanu. This series will be a 100% laughter-riot for the audience. Get ready to witness a unique and one-of-its-kind Rom-Com from director Rajesh. As a team, we are proud and elated to have our series title launched in a blockbuster show like Bigg Boss Ultimate. I thank the entire team of Disney+ Hotstar for such a wonderful opportunity.”

Actor Mugen Rao said, “The Bigg Boss show introduced me to the entire world. I am emotionally gleeful about being back in this house foran important announcement. I am a great fan of director Rajesh sir and hisworks. I have laughed a lot watching his movies and wanted to do something like that and fortunately I had the opportunity given to me by Disney+ Hotstar. This Is a huge offer for me. This series will offer a delightful and entertaining experience for the audience.”

Director M.Rajesh said, “It’s completely a new and fresh experience for me to direct a web series. The screen experience of audiences has gone through a big transformation now. I am proud for getting an opportunity to direct my first web series for a reputed global platform like Disney+ Hotstar, which is significantly changing the content landscape in Tamil. ‘MY3’ will be a refreshing experience for the audience. It’s a Rom-Com series that will reflect the lives of present-day youngsters. It’s a great honour to have our series’ title revealed at Bigg Boss Ultimate House.”

More updates about ‘MY3’ will be announced officially in the coming days.  ‘MY3’ will stream exclusively only on Disney+ Hotstar.