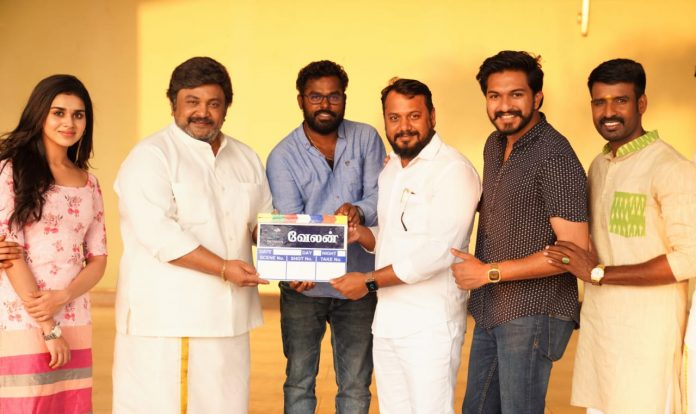 The new influx of talents is what that keeps the film industry afloat amidst mixed fortunes and pandemic waves.
Debutant producer Kalaimagan Mubarak of Sky man films international who possess plenty of passion in filmmaking is marking his presence in the film industry with his maiden venture “Velan”.

Promising and ambitious young hero Mugen who has established a larger fan base even before he could have his first release is the hero of this film .The emerging star in the process Meenakshi who holds plenty of promise plays the female lead. With an ensembing star cast in Ilaiya thilagam Prabhu , Soori, Thambi Ramiah, Harees Peradi, Sri ranjani and Sujatha that could cover the entire characters with familiar names “Velan”is directed KAVIN a former associate of Director Siva. The
Music is by Gopi Sundar,
Cinematography is by Gopi Jagadeeswarran, the Editor is K.Sarathkumar , the
Art and set work is mantled by T.Balasubramanian ,the
Stunt choreography is by Mahesh mathew , and the
Choreography is handled by Dinesh.
While Madjan karky, Ekadasi, and – Velmurugan pen the lyrics ,
Costumes are by Dhatsha pillai , and K.Rajan, , still photography is by “Kalaimamani” Chittrarasu, the
Dialogues are penned by M.Chandran, – Savarimuthu and Kavin.

Producer Kalaimagan Mubarak, Sky man Films International says, “It is my ambition to make films that connect the family audience. Any content that are focussed on family connections are bound to do good. The need for feel good films and positivity in thought process are the orders of the day. Kavin our debutant director comes from the school of Director Siva and his learning is evident in every line and frame of the movie. We had supported him with the best of cast and crew and iam sure this will reflect in he final.out out of the film. Mugam is a bundle of energy and his ability to convert his energy to performance is commendable. Meenakshi is adorable as a heroine. Prabhu sir and Soori sir are more than cooperative. It is indeed a pride to work with this mixed bag of experience and youth . We have completed 30 days of work in Pollachi and with the pace and smooth functional abilities of my team we are confident of a summer release.”