Bharathi Raja conferred with US Awards in New York 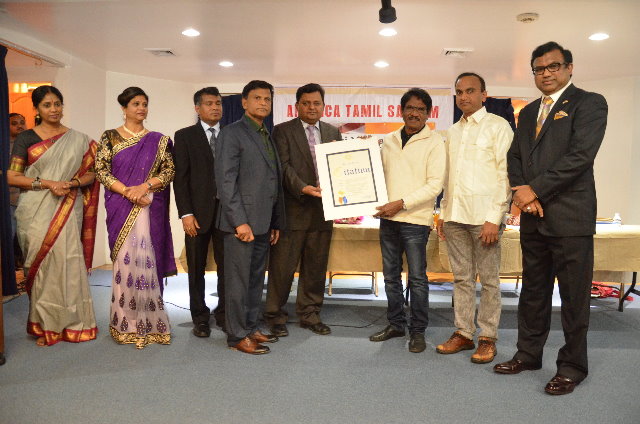 NEW YORK: Veteran director Bharathiraja was conferred with awards at a function organized by America Tamil Sangam in New York on Saturday.

Nassau County Executive (Mayor) Edward Mangano honored the director with the American proclamation for his service to cinema and America Tamil Sangam conferred the title Tamil Ratna on the ace director in the same event.
Describing Bharathiraja as a towering personality of Indian cinema, the proclamation said at a time when directors went abroad to film either entire movie or songs, Bharathiraja introduced the beauty of unspoiled and pristine unseen villages to the audience. He won several awards from the Government of India including Padma Shri and National awards. The Nassau County proclamation was presented in absentia as Mr. Mangano could not make it at the last minute.

Replying to felicitations, Bharathiraja said Diaspora Tamils excelled in various fields such as politics, medicine and law due to their hard work and dedication. He compared Diaspora Tamils to that of a newly wed bride who would bring good name to the family in which she was born and to the family she is married to. He complimented the American Tamils for fostering their roots in Tamil Nadu and the America Tamil Sangam for promoting Tamil culture in the US.

Jaya Sundaram, secretary of the Sangam welcomed the gathering and Calai Chandra, vice president, proposed a vote of thanks.