“AS I AM SUFFERING FROM KADHAL – A New Tamil Original Series”. 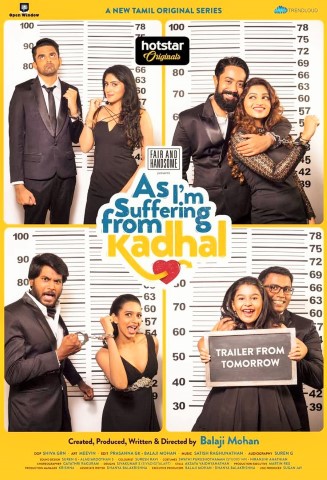 The web series, produced by Balaji Mohan’s (of Maari, Vaayai Moodi Pesavum and Kadhalil Sodhapuvadhu Eppudi fame) production house Open Window in association with Trendloud is a contemporary tale of love and its myriad forms and meanings. The 10-part series revolves around the lives of 3 young couples, a young divorced man and his 8-year old daughter. Through its various characters, the show charts the entire arc of optimism one experiences in love, and its transitions from giddy excitement to utter frustration, with large doses of insight and humour.

“Falling in love is the easy part. It’s staying in love that’s tougher. And the endless optimism of human beings to try it over and over again, despite mixed results, is quite fascinating for me. It’s a subject I’ve explored in different ways, and this time, with a series. It’s a lot of fun & filled with laugh out moments, making you rethink your relationships and relate all along the series. It’s been a fantastic journey until release with both the teams of Hotstar and Trendloud. I think digital distribution has a lot more nuances than film and I’m glad I had the folks at Trendloud double checking our efforts along the way. I also can’t think of a better destination for this content than India’s leading streaming platform Hotstar, who have ensured that the content gets the treatment I’ve envisioned for it.”, chimes in Balaji Mohan, Director

“It’s an immense pleasure to associate with both a leading platform like Hotstar and a director like Balaji Mohan on the same project. I think the two entities are similar in many ways – they make great content for the urban crowd and work towards ensuring contemporary stories reach the right consumer. Trendloud’s always been platform friendly and we like to think that we bring an innovative approach towards content production and distribution to the table. We were also able to rope in a prestigious youth-focused brand like Fair and Handsome into the project which we believe really added some value.
We have some exciting projects lined up for this year, so this is a great start to that journey. “ says Chidambaram Natesan, CEO, Trendloud.

Halfway into this relationship, Trendloud was able to provide a value proposition to Fair & Handsome who are now onboard as the title sponsors of the entire series.

‘Throughout our conversations with our viewers from the state, especially the younger users, one thing that comes out is that there is a huge appetite for stories that are authentic and contemporary. This show is an effort to address that appetite. We believe that we have a unique proposition for our audiences in Tamil Nadu: with shows like this, with a large roster of Tamil movies, with TV shows and with sports coverage in Tamil, we now have a very distinctive offering for our millions of loyal users in the state’, shares Ajit Mohan, CEO, Hotstar

The cast and members of Balaji Mohan’s team will go live on Facebook on 16 June, 2017 to have an opportunity to connect with real-time viewers and understand how the content has performed in a fun and candid manner.
As I’m Suffering from Kadhal launches on Hotstar on June 16th, with all 10 episodes releasing simultaneously. Apart from Tamil, the series will also be available in Telugu, with English subtitles available for both languages.
About Trendloud :
Established in 2015, Trendloud is Vision Time’s digital arm specializing in audio acquisition, digital content creation, film promotion and digital marketing. They are best known for their YouTube channels Madras Meter, Smile Settai and Paracetamol Paniyaram.
Trendloud has three web series releasing later this year, and involve partnerships with some of the biggest names in the independent film and digital streaming scene.

Aadhi Pinisetty to lock horns with Ram Pothineni’s in RAPO19 Ustaad Ram Pothineni will next be seen in an action entertainer, tentatively titled RAPO19. This...
Read more
News

Anbulla Ghilli Dogs have been human’s best companions for more than 10,000 years as recorded in history. Significantly, the movies featuring these beautiful creatures have...
Read more

Aadhi Pinisetty to lock horns with Ram Pothineni’s in RAPO19 Ustaad Ram Pothineni will next be seen in an action entertainer, tentatively titled RAPO19. This...
Read more
News

Anbulla Ghilli Dogs have been human’s best companions for more than 10,000 years as recorded in history. Significantly, the movies featuring these beautiful creatures have...
Read more
News

Ashok selvan next film with 3 Heroins